Is Your Hair Giving You the Blues? – The Shocking Truth About The Stuff We Use? 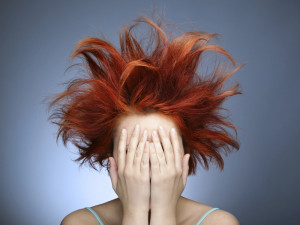 Whilst driving home the other day, I pondered on my recent contact with hairdressers presenting with a peculiar constellation of psychiatric symptoms. All patients were females presenting with diagnoses of affective disorders with medical signs and symptoms that pointed to an inflammatory process. Serology revealed very strong indicators of autoimmunity in two patients, with others having inflammatory indicators. That got me thinking; Could the exposure to chemicals in hair products potentially lead to inflammatory reactions and subsequent neuroinflammation (inflammation affecting the brain)? The original question was posed by the mother of one of the patients….Thank you!
I explored this a bit further with a basic literature search. According to Noone’s article, hairdressers are exposed to DNA damaging agents such as formaldehyde, metacrylate and acetone, the air concentration of which may be excessive in salons. Dahlgren et al. reported a case of autoimmune disease induced by a single hair treatment.

So how does this link with the brain?
The BBB is permeable through a number of mechanisms ( which I won’t go into detail here) ; suffice to say that an autoimmune reaction in the peripheral (luminal side) immune cells can stimulate the brain facing (abluminal) cells resulting in a so called “transfer” of the autoimmune reaction with resident immune cells of the brain taking over, producing inflammatory markers, oxidative stress markers and causing direct apoptosis (programmed cell death).

So do hair chemicals cause psychiatric disorders?
Causality in medicine is difficult to establish. Whilst a biological plausibility exists, a number of other Bradford Hill criteria have to be established before a causal relationship can be stated. Human studies show autoantibodies on exposure to formaldehyde. Other Bradford Hill criteria such as temporality, strength of association, dose response relationship require Case Control or Cohort studies. Nonetheless Dahlgren suggests that physicians should ask their patients about commercial products that contain formaldehyde when diagnosing autoimmune conditions.

Adjuvants and immunity
With the advent of technology, we are being exposed to a number of elements that the body recognises as foreign (as these have never been genetically programmed as familiar from an evolutionary point of view). In susceptible individuals, this exposure can trigger off an autoimmune reaction which if uncontrolled can set off a disease process. This is called the Autoimmune Syndrome Induced by Adjuvants (ASIA). Silicone for example is an adjuvant and in Prof Graham Hughes’ book on antiphospholipid syndrome, he reports a case of a 37 year old female who developed severe headaches, back pain and ultimately paralysis of the lower limbs in the context of a leaking silicone breast implant raising the question of the role of silicone. This lady’s surgeon had commented on similar cases with neurological symptoms that he had encountered. Here is a similar link on Prof Hughes’ blog. Similarly, autoimmune disease is considered a contraindication for silicone lap band insertion. Botox (Botulinum toxin), for example is associated with autoimmunity, the basis behind the 212 million dollar payout by Allergan to a 67 year old man with autoimmune related brain involvement. Although not directly related to autoimmunity, but consistent with our theme of foreign chemical exposure, a recent study showed the presence of Endocrine disrupting chemicals (EDCs) in commercially available bottled water, including steroid receptor agonists and antagonists which can adversely affect human health.
So should you cancel your next appointment with your hairdresser? Probably not. It is important to recognise that these are a small number of cases and decisions should not be made on small sample sizes. There are a number of questions unanswered and research is required to shed more light on this.
I would like to know if others have come across similar cases.

This article is written by Dr Sanil Rege. Sanil is a Consultant Psychiatrist in private practice on the Mornington Peninsula and co-founder of psychscene.com. He is pursuing an MBA at the Melbourne Business School.  You can follow him on Google+