Take a look at the two pictures. The top image shows a normal frontal lobe whilst the bottom image shows atrophy. Both patients presented with depression, but the management was distinctly different.

The frontal lobe is one of the most important areas of the brain. Besides the presence of  frontal eye fields and a number of other motor areas , the frontal lobe also maintains psychological homeostasis. It is responsible for maintaining optimal mood, behaviour and social judgement. It controls speed of thought and actions through its connections with the subcortical areas. Whilst a detailed description of its role is outside the scope of this article, I’ll try to list some important aspects that clinicians should keep in mind when dealing with psychiatric presentations. After all, the majority of psychiatric disorders can be conceptualised as fronto-temporo-limbic in origin.

The Case of Phineas Gage (Rod through the Frontal Lobe)

Some of the earliest understanding of the role of the frontal lobe came from the case of Phineas Gage. Phineas Gage suffered a terrible accident that resulted in an iron rod driven into his left frontal lobe after he placed the iron on an explosive device. Despite the seriousness of the injury, he was able to walk up to a cart which took him to the hospital. Following this, he showed a pronounced change in personality and behaviour becoming disrespectful and lacking in social skills and soon lost his job. Whilst this is a drastic scenario, in psychiatric clinical practice, milder involvement of frontal lobe is extremely common and can be due to a range of abnormalities e.g. vascular, vitamin deficiencies, endocrinal, structural, substance use etc. We at the Psych Scene Masterclass focus on the Rapid Outpatient Physical Examination (ROPE) as a quick way to identify organic elements contributing to the illness and also stress the importance of a cognitive examination.

How Does it Help Clinical Practice? 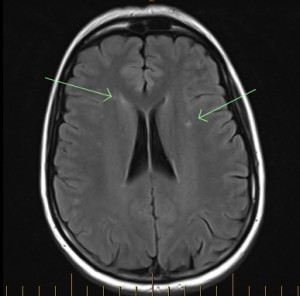 In clinical practice, a clinician should have a high index of suspicion of possible frontal lobe involvement in treatment resistant disorders as many clues to frontal lobe involvement come from subtle signs and collateral history e.g. change in personality, fatuousness, untidiness, slowness of action and thought, perseveration, etc. which is not always evident on a cross sectional interview. A cognitive examination involving the frontal lobe can uncover this to a large extent. Two of my favourites are the Clock drawing Test and the Luria 3 step test (fist-edge-palm). There are several others that one can perform (Verbal fluency, Go-No-Go test, Trail making etc.), but be sure to perform tests that test for verbal and non verbal functions.
What one should look for is the degree of abnormality on these tests. Whilst depression and other mood disorders can present with slowness or other milder abnormalities, structural frontal lobe involvement can present with abnormalities that are out of proportion with the mood disorder. Luria on its own has a good sensitivity and specificity in identifying neurocognitive impairment and it takes about a minute to perform the test (Weiner et al, 2011).
Thus, in treating depression, choosing antidepressants which increase dopamine in the frontal lobe (SNRI’s, NASSA’s or Agomelatine) may be more appropriate than ones that blunt dopamine in the frontal lobe (e.g. Venlafaxine at lower doses or SSRI’s through the inhibitory action of serotonin on dopamine). Moreover, if the orbitofrontal lobe is involved, a hypomanic/manic/ mixed affective state can occur requiring mood stabilisers. A recent case outlined how a frontal meningioma mimicked a relapse of psychosis (Velakoulis et al.,2013). The onset of depression in frontal lobe involvement is often secondary to the decline in executive functioning along with involvement of areas responsible for drive and motivation. This leads to frustration and a decreased ability to cope with stress as the set shifting ability is decreased. Patients develop anxiety related to change in routines or having to do something new. On pointing this out to some of them, they have remarked “At least I know it’s not me, I can try and do things differently”. Furthermore, showing patients images of scans helps patients understand why they may be experiencing difficulties. It validates their experience visually. It helps patients recognise the issue and try other strategies such as lifestyle modification, breaking tasks down, stress management rather than purely look at medication as the answer (when often in such cases it is only part of the solution).
The bottom line is; when the psychiatric issue seems to be resistant to treatment, think about cognition, it may just be the elephant in the room.

This article is written by Dr Sanil Rege. Sanil is a Consultant Psychiatrist in private practice on the Mornington Peninsula and co-founder of psychscene.com. He is pursuing an MBA at the Melbourne Business School. You can follow him on Google+ or connect with him on Linkedin.